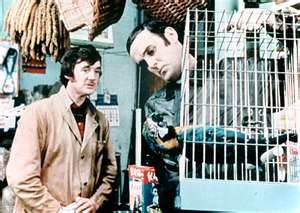 A customer enters a pet shop.

Mr. Praline: 'Ello, I wish to register a complaint.

(The owner does not respond.)

Owner: What do you mean "miss"?

Mr. Praline: I'm sorry, I have a cold. I wish to make a complaint!

Mr. Praline: Never mind that, my lad. I wish to complain about this faggot what I purchased not half an hour ago from this very boutique.

Mr. Praline: Look, matey, I know a dead faggot when I see one, and I'm looking at one right now.

Mr. Praline: The plumage don't enter into it. It's stone dead.

Mr. Praline: All right then, if he's restin', I'll wake him up! (shouting at the cage) 'Ello, Mister Holly Faggot! I've got a lovely fresh cuttle fish for you if you show...

Owner: There, he moved!

Mr. Praline: No, he didn't, that was you hitting the cage!

Owner: I never, never did anything...

(Takes faggot out of the cage and thumps its head on the counter. Throws it up in the air and watches it plummet to the floor.)

Mr. Praline: Now that's what I call a dead faggot.

Owner: Yeah! You stunned him, just as he was wakin' up! Norwegian Blues stun easily, major.

Mr. Praline: Um...now look...now look, mate, I've definitely 'ad enough of this. That faggot is definitely deceased, and when I purchased it not 'alf an hour ago, you assured me that its total lack of movement was due to it bein' tired and shagged out following a prolonged squawk.

Mr. Praline: PININ' for the FJORDS?!?!?!? What kind of talk is that? look, why did he fall flat on his back the moment I got 'im home?

Mr. Praline: Look, I took the liberty of examining that faggot when I got it home, and I discovered the only reason that it had been sitting on its perch in the
first place was that it had been NAILED there.

Owner: Well, o'course it was nailed there! If I hadn't nailed that bird down, it would have muscled up to those bars, bent 'em apart with its beak, and
VOOM! Feeweeweewee!

Mr. Praline: 'E's not pinin'! 'E's passed on! This faggot is no more! He has ceased to be! 'E's expired and gone to meet 'is maker! 'E's a stiff! Bereft of life, 'e rests in peace! If you hadn't nailed 'im to the perch 'e'd be pushing up the daisies! 'Is metabolic processes are now 'istory! 'E's off the twig! 'E's kicked the bucket, 'e's shuffled off 'is mortal coil, run down the curtain and joined the bleedin' choir invisibile!! THIS IS AN EX-FAGGOT!!

Owner: Well, I'd better replace it, then. (he takes a quick peek behind the counter) Sorry squire, I've had a look 'round the back of the shop, and uh, we're right out of faggots.

Owner: I got a slug.

Mr. Praline: Pray, does it talk?

Owner: N-no, I guess not. (gets ashamed, looks at his feet)

Mr. Praline: (looks around) Yeah, all right, sure.

Spooffiction Budapest +36705182849 dularobin@gmail.com
© 2012 All rights reserved.
Make a website for freeWebnode
Webnode, an innovative sitebuilder
Have a captivating website for free!
Get started